Graha (from Sanskrit ग्रह gráha—seizing, laying hold of, holding) is a 'cosmic influencer' on the living beings of mother Bhumidevi (earth). In Hindu Astrology, the Navagraha (Sanskrit: नवग्रह, nine seizers or nine influencers) are some of these major influencers.

The term Graha has sometimes been mistranslated as "planet", as five of the Navagraha (the "nine grahas") happen to be planets: Mars, Mercury, Jupiter, Venus, and Saturn. The sun, moon, Rahu (north or ascending lunar node) and Ketu (south or descending lunar node) are not "planets", however, and each of these nine entities are conceived only as chief celestial entities, constituting the Navagraha. A fact common to all the navagraha is that they have relative movement with respect to the background of fixed stars in the zodiac.

"Graha" is sometimes also translated as "celestial body", but Rahu and Ketu are not celestial bodies, but only positions in the lunar path. A third translation is celestial god or demi-god, but again, Rahu and Ketu are demonic Asuras, not benign deities like Devas. Accordingly to some, Grahas are the "markers of influence" that point out the karmic influence on the behavior of living beings. They themselves are not causative elements but can be compared to traffic signs.

According to the astrological treatise Prasna Marga, there are many other spiritual entities called grahas or spirits. All (except the navagrahas) are said to have been born of the anger of Lord Shiva or Rudra. Most grahas are generally malefic in nature but there are a few that may be good. The book called The Puranic Encyclopedia, under the heading 'Graha Pinda', gives a list of such grahas (spirits or spiritual entities, etc), that are said to afflict children, etc. Also in the same book in various places the names of spirits (grahas) are given, like 'Skhanda graha' that is said to cause miscarriage(s)

Surya (Devanagari: सूर्य, sūrya) is the chief, the solar deity, one of the Adityas, son of Kasyapa and one of his wife Aditi, of Indra, or of Dyaus Pitar (depending by the versions). He has hair and arms of gold. His chariot is pulled by seven horses, which represent the seven chakras. He presides as "Ravi" over "Ravi-war" or Sunday.

In Hindu religious literature, Surya is notably mentioned as the visible form of God that one can see every day. Furthermore, Shaivites and Vaishnavas often regard Surya as an aspect of Shiva and Vishnu, respectively. For example, the sun is called Surya Narayana by Vaishnavas. In Shaivite theology, Surya is said to be one of eight forms of Shiva, named the Astamurti.

He is said to be of Sattva Guna and represents the Soul,the King, highly placed persons or Father.

Chandra (Devanagari: चंद्र ) is a lunar deity. Chandra (moon) is also known as Soma and identified with the Vedic Lunar deity Soma. He is described as young, beautiful, fair; two-armed and having in his hands a club and a lotus. He rides his chariot (the moon) across the sky every night, pulled by ten white horses or an antelope. He is connected with dew, and as such, is one of the gods of fertility. He is also called Nishadipati (Nisha=night; Adipathi=Lord) and Kshuparaka (one who illuminates the night). He as Soma, presides over Somvarm or Monday. He is of Sattva Guna and represents the Mind, the Queen or Mother.

He is married to daughters of Daksha Prajapathi. He has therefore 27 wives, representing twenty seven Nakshatras (constellations). Budha (the planet Mercury) was born to Soma and Taraka.

Mangala (Devanagari: मंगल) is the god of Mars, the red planet. Mars is also called Angaraka ('one who is red in colour') or Bhauma ('son of Bhumi') in Sanskrit. He is the god of war and is celibate. He is considered the son of Prithvi or Bhumi, the Earth Goddess. He is the owner of the Aries and Scorpio signs, and a teacher of the occult sciences (Ruchaka Mahapurusha Yoga). He is of Tamas Guna in nature and represents Energetic action, confidence and ego.

He is painted red or flame colour, four-armed, carrying a trident, club, lotus and a spear. His Vahana (mount) is a ram. He presides over 'Mangal-war' or Tuesday.

Budha (Devanagari: बुध ) is the god of the planet Mercury and the son of Chandra (the moon) with Tara (Taraka). He is also the god of merchandise and protector of merchants. He is of Rajas Guna and represents Communication.

He is represented as being mild, eloquent and of greenish colour. He is represented holding a scimitar, a club and a shield, riding a winged lion in Ramghur temple. In other illustrations , he holds a sceptre and lotus and rides a carpet or an eagle or a chariot drawn by lions.

Budha presides over 'Budh-war' or Wednesday. In modern Hindi, Telugu, Bengali, Marathi,Kannada and Gujarati, Wednesday is called Budhvara; in Tamil and Malayalam it is Budhan.

Brihaspati(Devanagari: बृहस्पति ) is the name of a Vedic deity, personification of piety and religion, the chief offerer of prayers and sacrifices, represented as the Purohita of the gods with whom he intercedes for men. He is the Lord of planet Jupiter. He is of Sattva Guna and represents knowledge and teaching.

According to Hindu scriptures, he is the guru of the Devas and the arch-nemesis of Shukracharya, the guru of the Danavas. He is also known Guru, the god of wisdom and eloquence, to whom various works are ascribed, such as the "atheistic" Barhaspatya sutras.

He is described of yellow or golden colour and holding a stick, a lotus and his beads. He presides over 'Guru-war' or Thursday.

Shukra (Devanagari: शुक्र ), the Sanskrit for "clear, pure" or "brightness, clearness", is the name the son of Bhrigu and Ushana, and preceptor of the Daityas, and the guru of the Asuras, identified with the planet Venus (with honorific, शुक्राचार्य Shukracharya). He presides over 'Shukra-war' or Friday. He is Rajas in nature and represents wealth, pleasure and reproduction.

He is of white complexion, middle-aged and of agreeable countenance. He is described variously mounted, on a camel or a horse or a crocodile. He holds a stick, beads and a lotus and sometimes a bow and arrow.

In Astrology, there is a dasha or planetary period known as Shukra Dasha which remains active in a person's horoscope for 20 years. This dasha is believed to give more wealth, fortune and luxury to one's living if a person has Shukra positioned well in his horoscope as well as Shukra being an important benefic planet in his/her horoscope.

Shani (Devanagari: शनि, Śani) is one of the nine primary celestial beings in Hindu astrology (that is, Vedic astrology). Shani is embodied in the planet Saturn. Shani is the Lord of Saturday. He is Tamas in nature and represents learning the hard way, Career and Longevity.

The origin of word Shani(शनि) comes from the following: Shanaye Kramati Sa: (शनये क्रमति सः) i.e. the one who moves slowly. Saturn takes about 30 years to revolve around the Sun, thus it moves slowly compared to other planets, thus the Sanskrit name शनि. Shani is actually a demi-god and is a son of Surya (the Hindu Sun God) and his wife Chhaya. It is said that when he opened his eyes as a baby for the very first time, the sun went into an eclipse, which clearly denotes the impact of Shani on astrological charts (horoscope).

He is depicted dark in colour, clothed in black; holding a sword, arrows and two daggers and variously mounted on a black crow or a raven. He is depicted at other times as ugly, old, lame and having long hair, teeth and nails. He presides over 'Shani-war' or Saturday.

Rahu (Devanagari: राहु ) is God of the Ascending / North lunar node. Rahu is the head of the demonic snake that swallows the sun or the moon causing eclipses, according to Hindu scriptures. He is depicted in art as a dragon with no body riding a chariot drawn by eight black horses. He is a Tamas Asura who does his best to plunge any area of one's life he controls into chaos. The rahu kala is considered inauspicious.

According to legend, during the Samudra manthan, the asura Rahu drank some of the divine nectar. But before the nectar could pass his throat, Mohini (the female avatar of Vishnu) cut off his head. The head, however, remained immortal and is called Rahu , while the rest of the body became Ketu. It is believed that this immortal head occasionally swallows the sun or the moon, causing eclipses. Then, the sun or moon passes through the opening at the neck, ending the eclipse.

Ketu (Devanagari: केतु) is the Lord of Descending/South lunar node. Ketu is generally referred to as a "shadow" planet. He is considered as Tail of the Demon Snake. It is believed to have a tremendous impact on human lives and also the whole creation. In some special circumstances it helps someone achieve the zenith of fame. He is Tamas in nature and represents supernatural influences.

Astronomically, Ketu and Rahu denote the points of intersection of the paths of the Sun and the Moon as they move on the celestial sphere. Therefore, Rahu and Ketu are respectively called the north and the south lunar nodes. The fact that eclipses occur when Sun and Moon are at one of these points gives rise to the story of the swallowing of the Sun and the Moon. 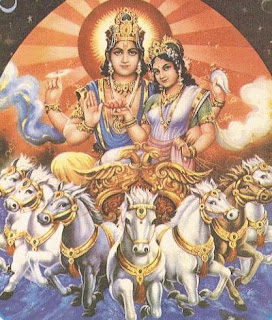