Shiva Ratri literally means the night devoted to Lord Shiva, This observance takes place on the fourteenth day of the dark fortnight in the month of Phalgun (February- March).

The festival dates back to the time when the ocean was churned in search of the life-giving nectar. During the churning process one of the ingredients which emerged was the deadly HALA HALA poison. This would have caused great destruction to the world and to the devotees of God. Realizing this, the devotees of God prayed to Lord Shiva for his divine assistance.

The All Merciful Lord in order to dispel the fears of beloved devotees and relive them of there suffering, swallowed the poison but kept it in His throat. As a result he began to sweet profusely and his throat became blue.

To express their love, devotees began to pour Jal (water) on Lord Shiva to cool the burning effect of the poison. Thus Shiva Ratri came into being.

Lord Shiva is the Re absorber of the universe Those who worship Him attain peace, happiness and contentment. All their negative qualities are destroyed and they receive His divine grace in the form of liberation.

Devotees observe strict spiritual discipline on this scared day. During the night many Hindus visit the Mandirs where they engage in worshiping Lord Shiva. They perform Shiva Puja, offering ingredients such as mild, honey, dahi, bael leaves and Abhishekam with tumeric water Kum kum water Chandan  Coconut water, and Cane Juice  and make a 108 Madder flower mala. Then they sing the glories of the Lord and recite Panchakshara (five syllable) Mantra: "AUM NAMAH SHIVAYA". Many listen to the glories of Lord Shiva as taken from scared text, "Shiva Puran. The sencere devotees also keep vigil throughout this night. The vigil is indeed symbolic. It reminds us to always be alert. It tells us to nourish not only out physical being but also the spiritual. As we all participate in worshiping the Supreme Lord remember that the most precious thing we can offer to Lord Shiva is our unconditional love.

Special offerings are also made on the lingam on consciousness night. The sages declare that the consciousness of Lord Shiva pervades the lingam on Mahashivaratri. the ideal lingam has no definite shape or color of its own but reflects the colour of the objects with which it comes in contact. The message of this is that the Lord becomes for the devotee what the devotee desires him to be.

When the supreme Lord manifested as Prabhu Shri Ram, the Shiva Lingam was installed and the Divinity within was worshiped by him. The Holy Ramayan (Lanka Kand) states that upon complection of the bridge to Lanka, the Blessed Lord Shri Ram proclaimed

param ramya uttam yah dharni- This is a most delightful and excellent spot.

Karihaun iha shambhu thapna- i will install an emblem of Lord Shambhu here.

So saying the messengers invited and fetched all the great sages who recited the scared mantras while Shri Ram made the various offerings with intense devotion.

ling thapi bidhivat kari puja- He installed the Lingam it with devotion.

Having installed an emblem and worshipped Divine presence within it with due solemnnity, He declared.

Shiva saman priya mohi na duja- No one is as dear to me as Shiva.

That scared spot was named "RAMESHVARAM". It is a place of pilgrimage for millions of devotees.

Lord Shiva is known by numerous names. Some of these are :

Shiva- Auspiciousness, Mahadev- the great God, Nila Kantha- the blue throat-ed one, Shankar- the Giver of joy, Shambhu- the abode of joy, Nataraja- the cosmic dancer. Vishvanath- the Master of the world, Tripurari- the Destroyer of the demon Tripura, Girija Patti- the consort of Mother Girija.

Parvati Maa is the mother of her two children her first son Ganesh Ji her second son Murugan and she took the form of the mother of ayyappa because he was created from the Form of Sangili Karupan and was abanded out with out a home and she declared him as her son, And most devotees say that she is the mother of three sons and sometimes the three are in various pictures together, 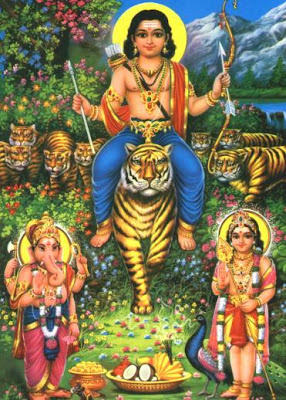 Maha Kali is known in different forms to she also took the form of mother Parvati thats why some say Kali maa is the wife of Lord Shiva but she took that form because Parvati maa was angry after her son ganesh had his head come off and she was about to punish the devis and devatas untill Lord Vishnu said he would replace the head of her son but he could only do that with the first head he saw and the first head was an elephant head so he had to use that and when she was pleased she changed her form from Kali maa back to Parvati maa. 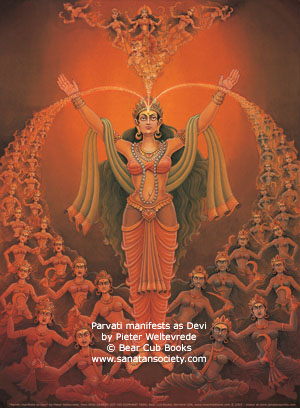